In my perpetual quest for ways to wring every last ounce of goodness out of every stage in a process, last week I had one of those why did I never think of this before epiphanies. 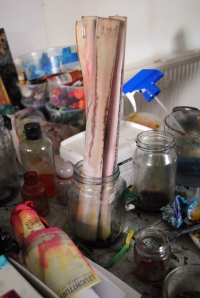 It’s no good to dye fabric with now, but it will dye paper!

Decanting the dye dregs into jam jars, rolling up scrap paper and standing them in the jar.

Then just let science take over: the water soaks in and climbs up the dry paper bringing the remaining pigment in its wake.

When they’re soaked through, or the water in the jar has dried up, or when I just need to clear some space I empty the lot into a bucket to finish intermingling and eventually dry.

It’s satisfying on so many levels: using up color, repurposing scrap paper, creating patterns for future collages and art works. It does it’s own thing when left to its own devices. It’s messy and unpredictable (just like me) And it’s effectively better than free!

More variations on the theme:

7 thoughts on “every last ounce of goodness”

This site uses Akismet to reduce spam. Learn how your comment data is processed.