And that’s without any mention of the butterflies.

Or Steve Jobs. But that’s all for another day…

The thing I wanted to tell you about now is monkey related:
Since I spent a weekend in conversation with my daemons, they’ve been magicking themselves into apparency here, there & all over. This week they’ve manifested in a semi-Cubist, heavy handed biro scrawl, merged, their tribal Día de Muertos faces peering out from the recesses of the page.

We’ve been sharing the available space in this mind for a few decades. It’s refreshing to shift the power balance between ‘them’ and ‘us’ (for want of better terms).

So when I read the post from Danny Gregory this week, asking for tales from our Monkeys, another bunch of dots connected: Monkey minded me, the battles with my daemons, and all the reasons it took me so long to go to art school.

I dedicated a corner of a page to the Monkeys (they were chief trouser-wearers and direction-choosers in my life for way too long. They get a corner to play in now. I get the rest of the page. That is ALL) A place to start unscrambling some thoughts:

These are the bare bones of those thoughts:

My monkeys bewilder me with their faultlessly formed logic.

They have faith only in the opinions and the hard-hearted snipes of the the hardcore cynics. They know why I can’t and what I can’t and all the reasons why.

They will poke at me with pointy sticks if I turn my back on them for long. They stand in my way. They say: don’t show yourself, not your real self, cos then the haters aren’t hating the real you. You tricked the haters, the mean kids, the ones who know. You win. See?

The monkey’s logic is flawed at a level so deep I sometimes forget : Do not trust the monkeys.

It was the Monkey’s determination that as art isn’t a real job, and work isn’t supposed to be fun, and all the associated hooey, that defined my existence until quite recently. A large part of life (by my reckoning) is unpicking the knots that we spend the preceding years tying ourselves up in. Unattended monkeys will continue tying knots.

Thought forms are the children of an earlier project, my final project in the first year of my art degree. Focussing on the idea of meditation: trying to still the crazed jabbering of monkey mind, find some spaces between the thoughts.

It can be exhausting. 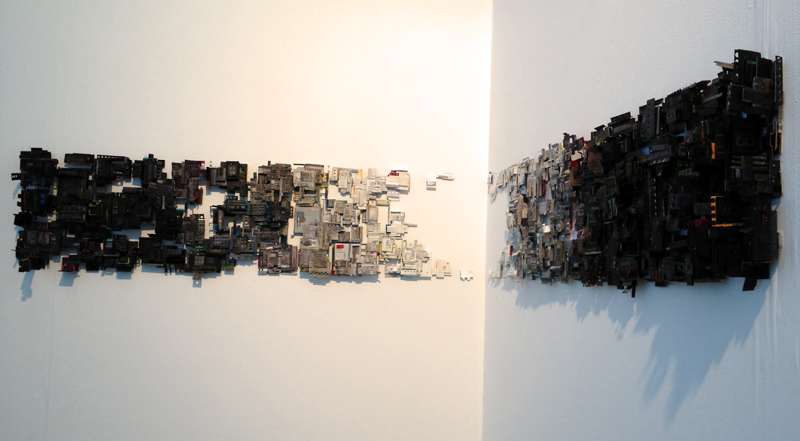 This piece took shape as a 3 metre x 45 cm relief collage constructed from reclaimed bits and bobs, mostly painted paper, card, pins, tiny scraps of wood, wire, staples. These kinda things. The things and stuff that came to my mind as I was making it. Positioned in a corner it draws the viewer in so they become a part of the work, surrounded by the noise.

Complex trains of thought – interconnected and overlapping – are represented by the darkest and most detailed elements.

The process of meditation calming the mind from the persistent banter of thoughts by suspending this mental chatter from one moment to the next is represented by diminishing detail and lighter tones reducing to nothing in the centre.

I’d love to recreate this on an even bigger scale some day.