Have you used these pens? Pilot Parallel Pens.  I love them.
They aren’t only beautiful to write and draw with, but there’s magic you can do if you have more than one and different colored ink. I got these years ago and they’d drifted to the back of my repertoire for a long while. It was a strong sense of no idea what to do that made me remember them again this week.

I’m not a calligrapher in the real sense, but I love to play.
Have you seen Denise Lach’s art? This is my kind of calligr-drawing-joy

If there was one overriding theme of this week it was sleep. I’ve never been so tired. The culmination of some health stuff, some worry-based stuff, and some ongoing insomnia-based stuff all collided and my body made the unilateral decision that the only thing it was going to properly do was sleep.

Long heavy nights of it and small naps of it in the intervening day times when circumstance permitted. The bits of the week that weren’t spent sleeping were spent in blinky incoherence.

(tbh, this week hasn’t been so different.)

So much time in sleep  means more crossover than usual between the waking and the dreaming realities. 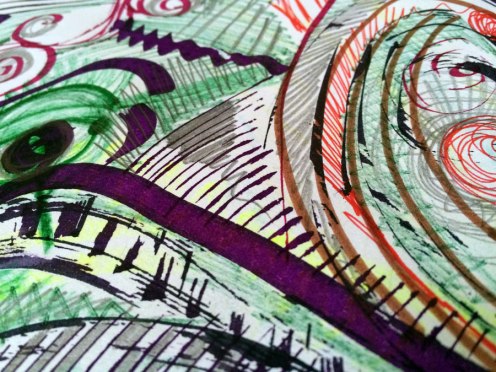 Episodes of dream can manifest the mundane, and the awake-world does something crazy and surreal.

And the two places overlap and get muddled.

It’s a big jambled thing, and although there wasn’t an intent, this illustrates it pretty much as it was.